When reviewing a model by using the generated data dictionary (i.e., the Gendoc output document), currently there is no way to know whether there are additional attributes/operations/notification from the abstract ExtendedComposite extending class (because there is no instance of the abstract class).

To update the Gendoc script to generate the description of the ExtendedComposte associations of the extended object class. See 2022-08-05 IISOMI Meeting Minutes

To update the ExtendedComposite example in Table 5.15 of TR-531 Mapping guideline to remove the dot and change the extending class to abstract. See 2022-08-05 IISOMI Meeting Minutes

Bernd provided an update in the UML guidlines. 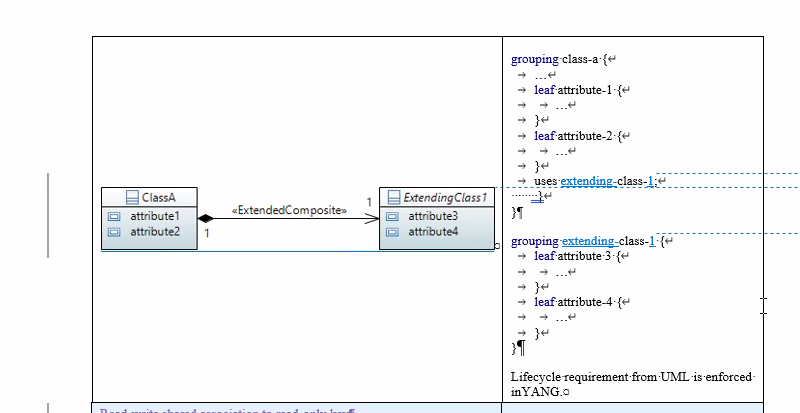 Not navigable from the class.

The grouping extended class1 is not visible, but the attributes from ExtendingClass1 are in a grouping that is used in classA 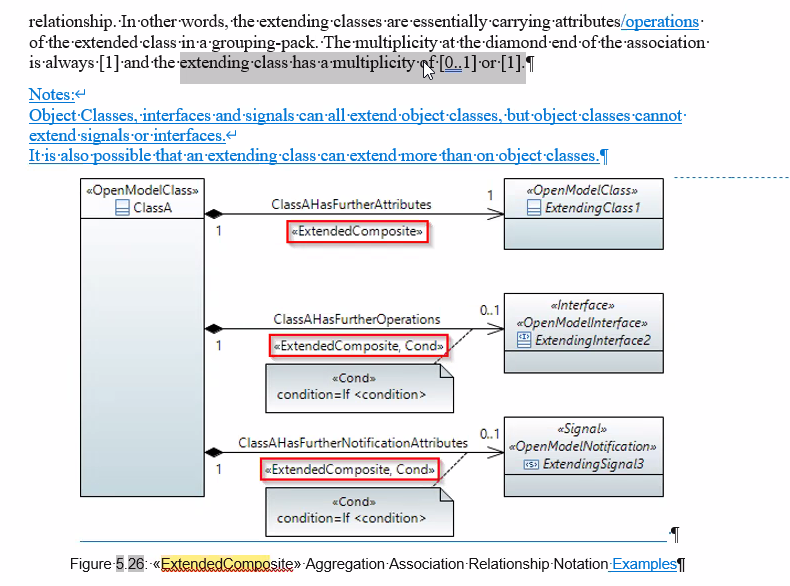 Discussion that end owner must be association for both ends.

The extending class is abstract. 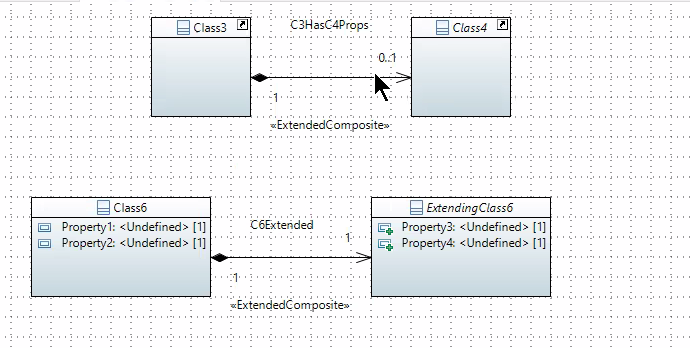 Bernd noted that there should be a condition on the 0..1 .

Nigel noted that as an aside the the condition is coded by the uml-yang tool as an if-feature which is a problem. 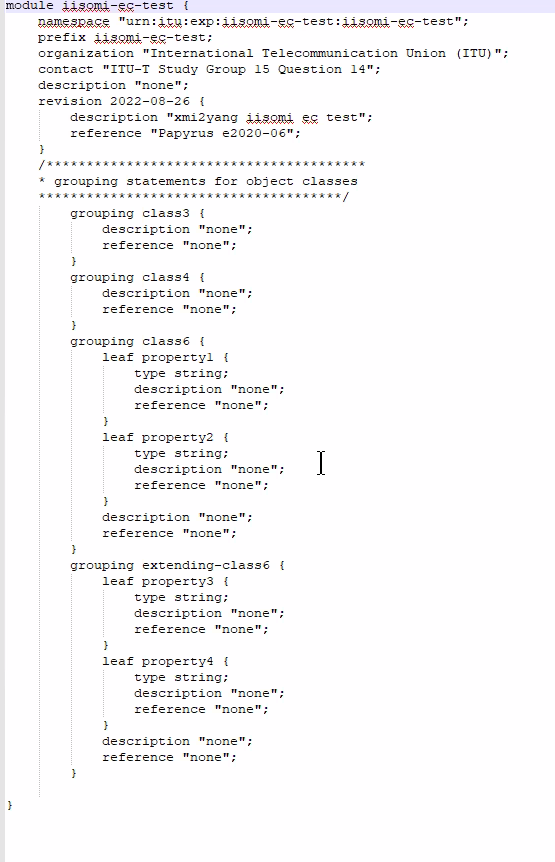 Nigel noted that the current extended composite association is navigable.

Scott changed the example to add classifier navigability and then re-ran the mapping. 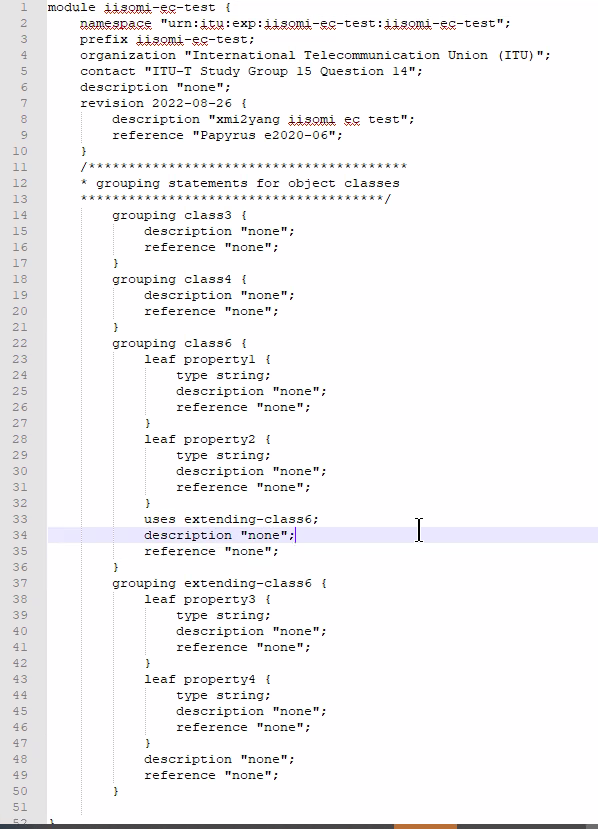 In the UML an attribute now appears in the classifier. 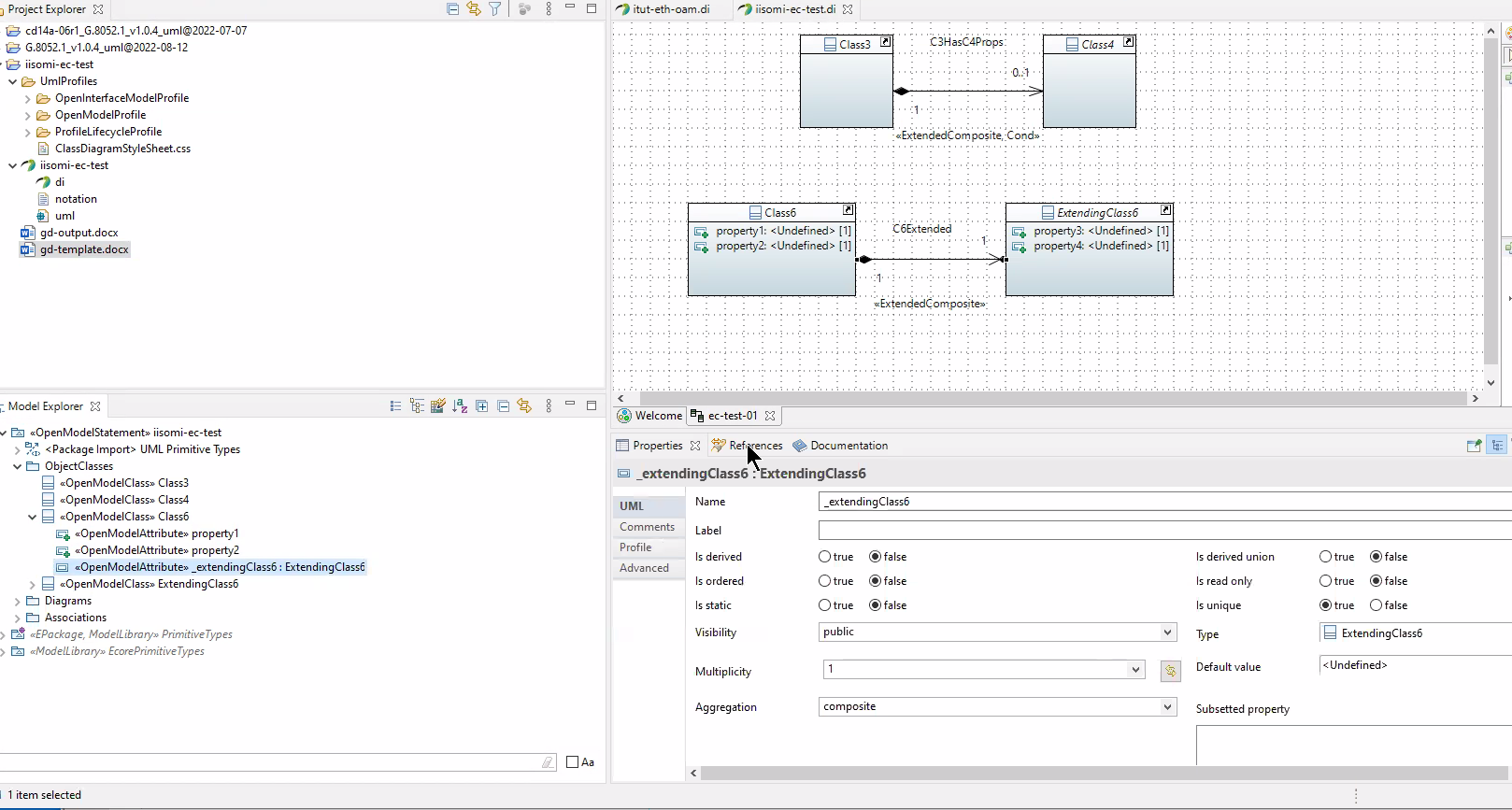 Discussion on what is actually required.

Noted that the current experimental model did not have root element and hence would not generate the containers.

multiplicity of 1..1 makes a container.

There is no container for the extending-class6 (this is correct).

A classifier based extended composite association provides the right results.

Agreed that the UML guidelines need to show both the UML form that generates the correct Yang (with the unnecessary attribute in the UML) and the correct UML form with extensive explanation of what should be used when Yang is required and why the extra attribute does not appear.

Scott ran gendoc, but the output appeared to no longer be correct.

Scott will retry the after the call.

No new actions were created but the existing action was kept open with the date unchanged.

Scott provided the gendoc script for extracting the «ExtendedComposite» relationships.

Bernd provided a proposal for the UML modelling guidelines decribing the workaround regarding the «ExtendedComposite» relationships when the model needs to be mapped to YANG by the UML to YANG mapping tool.

Note: The modelling of the «ExtendedComposite» aggregation needs to be adapted in case the UML model needs to be mapped to YANG by the UML to YANG mapping tool [5].
It is recognized that this workaround will create an unnecessary attribute in the extended class, but the correct YANG can only be generated when the navigable association end at the extending class is owned by the classifier (expressed by the black dot at the arrow as shown in the diagram below). 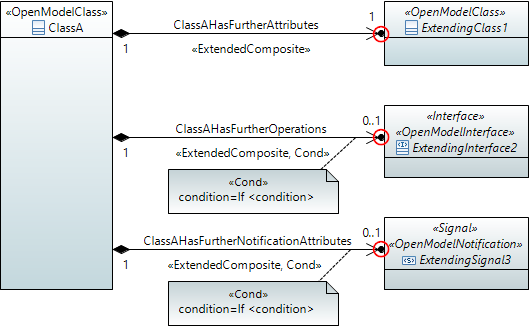 The above proposal was updated and agreed. Bernd will upate the guidelines document accordingly.